3 Ways to Add Depth to a Novel 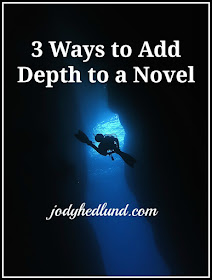 I recently received an email from a young writer, Theresa, who asked this question:

“My books come out more like short stories (under a hundred pages) rather than full books. Are there any tips or tricks that you can share with me about further developing the story line and characters to make my books longer?”

Thanks for a great question, Theresa!

Most of my adult novels are approximately 100,000 words in length (over 300 pages). As I thought about what I do to reach that amount, I came up with three main things.

1. Give the external plot more than one type of literary conflict.

Most writers develop their plot around some kind of external conflict usually involving a “bad guy” (also known as an antagonist or Man vs. Man). That’s all well and good. But there are other ways to bring about additional conflict: Man vs. Society, Man vs. Nature, Man vs. Himself, Man vs. Technology. (Here’s a really great post that explains the “Big Five” types of literary conflict.)

I often try to have more than one of these types of conflict going throughout my physical plot. For example, my heroine in For Love & Honor is not only battling a creepy antagonist (Man vs. Man), but she’s also struggling against the community who thinks she’s a witch (Man vs. Society) as well as starvation and hardships from a castle siege (Man vs. Nature).

The more types of literary conflict we add to the physical plot, the more complex our story becomes.

2. Give your characters deep internal problems to work through.

Another way to add more layers to a story is by making our characters deeper, getting below their skin to the heart. We have to delve inside the real, raw, emotional issues and problems that our characters are going through.

A word of caution. This is more than just our characters expressing their reactions to the physical plot, which is important too. Of course they need to show and express appropriate feelings in regards to the antagonist.

However, an emotional plot is a bigger internal conflict that we weave throughout the entire story. This is usually a character flaw or problem like fear, pride, insecurity, etc. that is related to our character’s backstory.

For example, in For Love & Honor, the heroine is struggling with insecurity over a blemish that she’s been born with. This insecurity stems in part from her father’s rejection of her as a little girl for that blemish, which has made her feel bad about herself and believe that others will reject her too. Throughout the story, circumstances force the heroine to wrestle through this emotional issue. Her growth is part of her character arc—working through the insecurity and becoming a stronger person by the end of the story.

The more we intertwine this emotional plot with the physical, the fuller and richer our story will be and the better our readers connect with our characters.

3. Give the setting the respect it’s due.

Another way stories can lack depth is by overlooking setting and focusing too much on plot and characters.

Instead, we want to give the setting the respect that it’s due and treat it as both part of the plot and as a character unto itself. To do so, we focus on descriptions and sensory details that relate to the moods and pace of the plot. When we do that, the setting comes alive, like another character that has needs and flaws and history that we can slowly and carefully develop.

When we view the setting as more than mere descriptions but as a living force within the story, then we’re usually able to add the appropriate details at the right times, keeping our readers grounded in the story but not overloading them.

As we’re looking at increasing a novel’s length, we clearly don’t want to add more words just to reach an arbitrary word count goal. Rather we should make every word count for something.

What about YOU? How do you add depth to your stories?