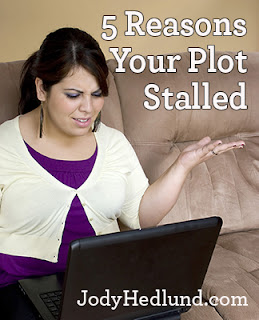 It's my privilege to host Janice Hardy here on my blog today. Janice is the author of several fantastic writing resources, including Planning Your Novel: Ideas and Structure, a series of self-guided workshops that help you turn your idea into a novel, and the just-released companion guide, the Planning Your Novel Workbook. 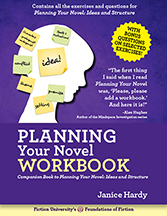 Today, Janice shares some insights on how our plots tend to stall. But she doesn’t just stop with common plot problems. She gives insightful tips and excellent questions we can ask to help us jump-start our stalled plots.

Join me in welcoming Janice to the blog! 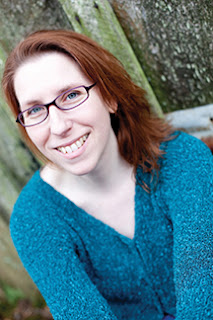 The plot is the engine of the story, and like any engine, it can stall. In most cases, the plot simply runs out of fuel and once you refill the story tank, the plot drives forward again. It's just a matter of figuring out which fuel your particular engine needs.

Maybe you're missing the goal (the common unleaded fuel of the story world), or there are no stakes, or no character motivation. The wrong characters might be filling the tank, or the protagonist is making the wrong choices. Refill the tank with the right mixture, and you'll be back on the road in no time.

Plot mechanics are pretty straightforward, so when a plot stalls, it's usually due to a small number of reasons. Let's take a look at the most common ones.

1. You Forgot What the Goal of the Scene (or the Book) Was

The lack of a scene goal is the number-one reason plots stall. There’s nothing for the protagonist to do to drive the plot forward. She doesn't want anything, isn't trying to stop anything, she's just living her day or performing random tasks that aren't leading to anything.

In some cases, the problem is bigger and the novel itself is lacking the goal. This is common with premises novels, where the idea isn't formed enough to create a solid plot, so there's nothing external for the protagonist to do. For example, a romance where the goal is to "find love again" is too vague to plot. It's the specifics of how the protagonist finds love, and the choices she makes to act in ways to achieve that goal that create the plot--such as, take up a hobby to meet potential partners.

How to restart the plot: Look at your scene and determine what the protagonist wants, and the reason that scene is in the novel. If you're not sure, ask:

• What does your protagonist want in the scene?
• How does this goal advance the plot to the next scene?
• What must be done to resolve the core conflict of the novel?
• What are the key steps to resolving the core conflict?
• Does the stalled scene contain one of those steps? Should it?

2. The Outcome of the Scene Doesn’t Matter

A lack of stakes is the second-most common problem with stalled plots. The protagonist has things to do and problems to solve, but the outcomes don't matter and don't affect the bigger story at all. Solving the problem gains the protagonist nothing, and failing to solve the problem loses her nothing. If you cut the scene, the overall novel wouldn't change.

How to restart the plot: Make the protagonist's actions have consequences. Resolving that problem and achieving that goal should matter in some way. Success wins her something important, or prevents her from losing something she cares about. Unsure of the stakes? Ask:

• What will happen to the protagonist is she fails?
• What doesn't the protagonist want to see happen?
• How will this scene affect either the characters or the story?
• How does failure here make things worse for the protagonist or people she cares about?

3. The Protagonist Has No Reason to Act

Sometimes your characters take a joyride with no destination in mind. Sure, they're driving all over the story, seeing the sights, having a grand time, but there's no reason for them to be in that car. The protagonist is doing what she's told, but she has no personal reason to do it--she's just taking turns as you call them out to her. Without a reason to act (the character motivation), there's nothing driving the scene goal.

How to restart the plot: Give the protagonist personal reasons to take on those scene and story goals (the stakes can help here. Low or no stakes almost always accompanies a lack of motivation). Ask:

4. The Wrong Character is Acting

Backseat drivers, right? They think they know the best route to take to get anywhere, but they end up shouting directions and getting everybody lost. If the wrong character is the one driving the scene, your plot can end up down a path the story wasn't supposed to go in. It might be a small side trip, or a major detour. It might even be the right direction, but the wrong character is driving, so when the plot gets there, the next leg of the journey goes the wrong way.

How to restart the plot: Make sure the characters driving the pivotal scenes moving the main plot forward are the ones who will be resolving the core conflict in the end. Other characters might drive for a short leg of the trip (say, a subplot or two), but the main plot is driven by the main characters. If you're not sure who's behind the wheel, ask:

5. It’s Got the Wrong Directions

Plots rely on character choices to move forward, so if the protagonist makes the wrong choice, the plot can stall. If the choice is too easy or doesn't affect the story or characters at all, it's not adding fuel to the plot engine. Choices should make things harder for the protagonist, and create uncertainty about what comes next. They move the plot forward by giving the protagonist the next goal.

How to restart the plot: Look at moments when the protagonist makes a choice. If there's no conflict to making that choice, or the choice isn't hard, then the decision won't matter. If the choice is obvious (such as, press the button everyone lives, don't press it and they all die), it's not really a choice.

Choices create changes and if nothing changes, the plot can't move forward. If you're not sure, ask:

• Is the choice a real choice or one where the "right" choice is obvious?
• Does the choice offer options that all have potential problems and stakes?
• Are there consequences associated with the choice?
• Does anything change based on this choice?

A stalled plot is annoying, but it's possible to restart it with the right fuel. Before long you'll have that engine sputtering back to life.

Has a stalled plot ever left you stranded? How did you get it moving again?

To celebrate the release of Janice's newest writing books, she's going on a three-month blog tour--and each month, one lucky winner will receive a 10-page critique from her.

It's easy to enter. Simply leave a comment and enter the drawing via Rafflecopter. One entry per blog, but you can enter on every stop on the tour. At the end of each month, Janice will randomly choose a winner.

Janice Hardy is the award-winning author of The Healing Wars trilogy and the Foundations of Fiction series, including Planning Your Novel: Ideas and Structure, a self-guided workshop for planning or revising a novel, the companion Planning Your Novel Workbook, and the upcoming Revising Your Novel: First Draft to Finished Draft. She's also the founder of the writing site, Fiction University.

For more advice and helpful writing tips, visit her at www.fiction-university.com or @Janice_Hardy.