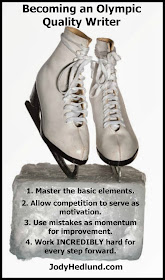 Like the rest of the world, I've been watching the 2014 Winter Olympics in Sochi, Russia. Since I have three daughters, it's inevitable that women's figure skating is the event we watch the most often.

Aside from the beauty, athleticism, and talent, I'm always fascinated by the behind-the-scenes glimpses we get every once in a while of certain athletes. I like hearing the stories of how they trained and became the top of their sport, because it's so inspiring.

As I've read and heard about various Olympic figure skaters, I realized a lot of the traits they employed to become great athletes are some of the qualities that we writers can employ to become great authors.

Over and over on both TV and in news articles, I've seen evidence that the skaters had to master the elements specific to their sport including jumps, spins, footwork, etc. They had to spend countless hours learning the basics before they could move on to the more difficult techniques and jumps.

The same is true in writing. There are basics elements a writer needs to learn for setting, dialog, POV, pacing, plotting, etc. We can't expect to become smoother, more succinct, and riveting without first mastering the basics.

2. Allow competition to serve as motivation.

In a New York Times article, Tara Lipinski, gold medal winner of 1998 Olympics, said: "I think a rivalry is always needed. I had one with Michelle Kwan, and I didn’t slack off one day because I knew she was practicing hard somewhere . . . [skaters] know someone could take their place in an instant and so they have to be better ."

American skater Ashley Wagner doesn't deny her competitive nature. She's quoted in NBC news as saying: "I love to win, honestly. ... If you love to win, you should say it. And honestly, I'm hooked on it."

In the publishing industry, there are thousands upon thousands of writers vying for a limited number of readers' pocketbooks and attention. The competition is fierce. But we don't have to let that scare us from trying. Instead we can let it motivate us to keep writing more and better.

3. Use mistakes as momentum for improvement.

In November, the 15 year old Russian skater, Julia Lipnitskaia beat the world champion, Carolina Kostner of Italy. Afterward, Lipnitskaia was distraught, because even though she'd won, she still had botched two jumps in her win. Now several months later, Lipnitskaia is skating nearly flawlessly, having two mesmerizing performances in the team competition.

Those striving to be the best, whether skaters or writers, don't let loss weigh them down or make them quit; rather, setbacks drive them to work harder.

To become Olympic quality, most skaters started young and had strict practice schedules involving hours and hours per day on the rink along with ballet and off-ice conditioning. They had to be self-disciplined, determined, and driven, often giving up other pursuits and interests in order to have the time to devote to skating.

Even then, after so much training, the majority of skaters fight to attract notice at the junior level, and only the very best break through at a senior level.

Writers, too, must have strict writing regimens and expect to practice long hours, often sacrificing free time and hobbies to fit in daily writing workouts. If we want Olympic quality success and stardom then we have to put in Olympic style effort and training.

And yet all too often writers expect to have high sales, hit best seller lists, and rise to fame without having put in the hours, days, and years of writing. Too many hope to gain notice at the junior level when really they're still amateurs.

But for now, I'll keep watching and learning from the Olympians about what it takes to make dreams come true. And I'll do my best to follow in their footsteps!

How about you? Have you been watching the Olympics? What are some lessons you've taken away?